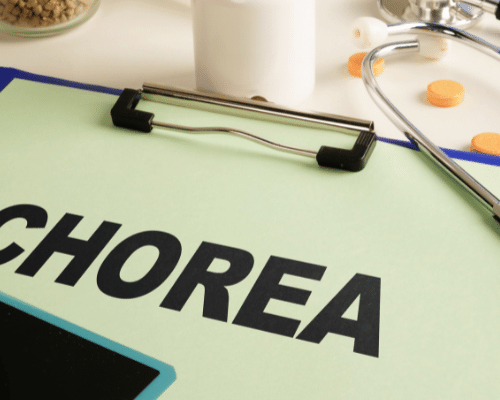 Chorea may be termed as a disorder that can lead to unpredictable and involuntary movements of body parts like the face, shoulders, and hips. Chorea may vary from minor fidgeting movements to uncontrollable body movements. It is likely to have issues like speaking, posture, swallowing, and gait. Chorea generally gets worst while trying to make voluntary movements or during anxiety but it is less problematic when sleeping.

It is inherited chorea caused due to the breakdown of the brain cells. Normally the patients of this disease show symptoms like writhing or jerking that worsen with time. “Milkmaid’s Grip”, a condition in which the muscles of hands are too weak to apply pressure with these while handshake.

It is a rare genetic condition characterized by abnormal red cells. This type of Chorea leads to neurological abnormalities that cause malfunctioning of the brain. Abnormal movements of legs and arms, rapid but purposeless face movements, pelvic pushes, and shoulder shrugs are normally seen in this type of Chorea.

This type of Chorea affects the face, hands, and arms mostly and is generally seen in children or young ones. Sydenham’s Chorea may hinder the basic voluntary movements causing difficulty in the performance of routine tasks like having food, changing dress, etc. The patients of this type also have no control over their tongue as well as has Milkmaid’s grip. 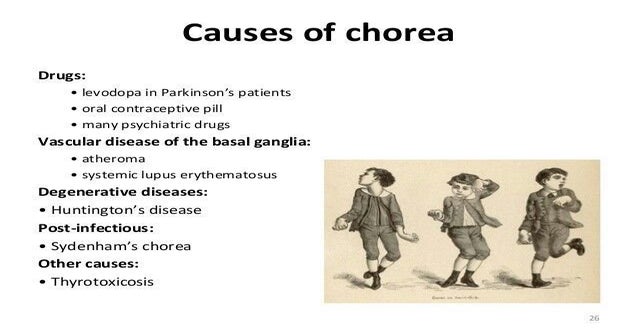 Chorea is not difficult to diagnose. A thorough physical check-up, family history review, and neurological examination of the patient are enough to diagnose this disease.

A psychiatrist can help in finding traces of Chorea by asking some questions about the patient’s emotional state, behavior patterns, skills to judge, and qualities to cope with circumstances.

The neurologist can help in the diagnosis of Chorea by performing some tests or asking a specific question about reflex actions, balance and coordination, senses, mental status, and mood swings.

Some specific tests performed by neurologists about memory, mental sharpness, logic, and reasoning can also help in the diagnosis of Chorea.

The doctor can demand imaging scans like CT scans and MRI to get a complete picture of the brain that can help in the diagnosis of abnormalities and different types.

Once the doctor is sure about the presence of the issue inpatient, the next step is to identify the defective gene. This is possible with genetic testing especially when there is no family history of the disease.

Severe symptoms like trembling in the whole body, irregular and violent movements, inability to sit, swallow, speak, stand or even walk can be best treated with Homeo medicine Tarantula Hisp. This medicine is especially helpful when the patient feels the right side affected mostly with contraction continued even at the night. Other symptoms that ask for this medicine are fainting, anxiety, oppressed cardiac region, pain in muscles due to contraction or rigidity, and all these symptoms worsen on touch or pressure. Such a patient can feel better when in bed or his attention is diverted.

The patients may suffer from the symptoms of verminous irritation, pale face, distorted eyes, nostrils irritation, facial edema, increased thirst, sweating of feet with an unpleasant odor, and restlessness during sleep. Such symptoms can be best relieved with the Homeo medicine Silicea.

The Chorea associated with numbness of muscles, unsteady gait, and crawling-like sensations in the affected areas find its best remedy Nux Vomica. The symptoms of lack of appetite and constipation that are higher in the morning time can also be relieved using this medicine.

Opium is the best Homeo remedy for Chorea when associated with emotional stress. The symptoms of trembling of head, hands, and arms, spasmodic jerking, and continuous forward and backward movement of arms are also the indications to use Opium for relief.

Chorea is associated with irregular twitching that starts from the face and spreads to the whole body, jerky attacks in the diaphragm and chest muscles, breathlessness, and painful stretching of abdominal muscles demands Homeopathic medicine Secale Cor for instant relief. This medicine also helps in relieving distorted or foolish behavior as normally seen in patients.

The bacterial infection of facial hair that results in inflammation of the face is one of the possible outcomes of Chorea. Other symptoms like cravings for food, soreness of the mouth, dried hair, ill-humored and stubborn behavior are also seen in some of the patients. Thuja is the best Homeo remedy for the patient who suffers from aforesaid symptoms.

Chronic Chorea with the symptoms of depression, muscular twitching, body jerks especially during sleep, yelling as in case of frightened and continuous and restless movement of feet while in bed can be best treated with the Homeo remedy Zincum Met. Such Chorea normally aggravates after having dinner or alcohol as well as with body exertion like exercise.

Chorea sometimes associated with hysteria may show extreme and violent symptoms in the patients and ask for Sticta Pul as its best remedy. The other symptoms indicating this Homeo remedy are limited movements, the intensity of symptoms in the evening, jumping and dancing movements in the legs and feet, and last but not least the feelings as if legs are floating when laying down.

Causticum is one of the best Homeo remedies for Chorea when muscles of the right side of the body including the tongue, face, arms, and even legs are affected more than the left side muscles. Such patients also experience difficulty in speaking, walking, and sleeping. The patient is restless during sleep and gets exhausted while continuously changing positions. Causticum has been proved the best to relieve all such symptoms.

Please do not use any of these medicines on your own without consulting a professional homeopathic doctor.