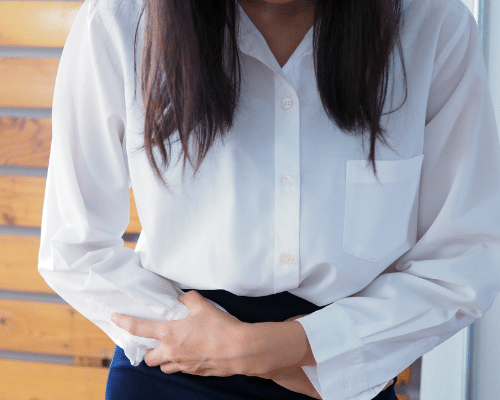 There are normally no underlying causes of dysmenorrhea and it is very common among girls having heavy blood flow, low body weight in early started periods.  But it is sometimes caused due to following

Following are the symptoms of painful periods.

There are two types of Dysmenorrhea. The types of dysmenorrhea are described as follows

In this type, the pain has no underlying cause and it is very common among girls. These are also known as common cramps during menstruation. The hormonal changes and ovulation is associated with this type.

This type of period pain is caused due to some problem.  Endometriosis is the most common cause of secondary Dysmenorrhea. In addition, pelvis congestion, adenomyosis, leiomyoma, and ovarian cysts also cause secondary dysmenorrhea.

How to Diagnose Dysmenorrhea?

Dysmenorrhea is normal in women but still, the doctor may perform a complete physical examination in case to check infection or abnormalities in the reproductive organ of the woman, if he suspects any disorder.

If the cramps seem abnormal or doctors suspect any abnormality inside the woman after a physical exam, he may ask for scans like Ultrasound, CT scan, and even MRI of reproductive organs including uterus, ovaries, cervix, and fallopian tubes to get complete details.

Laparoscopy is the advanced stage, though not normally needed in case of dysmenorrhea, in which a tube holding camera is passed through the uterus through small incisions in the abdominal region. The pictures and video captured by the camera help in the detection of any issue like fibroids, cysts, pregnancy inside the tubes, endometriosis, or any corrosion inside the reproductive organs causing pain.

In cases, dysmenorrhea comes with the symptoms like intense pain that arises and relieves suddenly accompanied with heat need Homeo medicine Belladonna for relief. Belladonna is the best friend of the woman who feels an early to time bright red blood flow with restlessness, light sensitivity, heavy pulse, and extreme cramps that become even worst on touch. Such women feel difficulty in walking and bending as their pain increases but sitting and pressure over the belly give them relief.

The menstrual cramps with intense pain in the abdomen as well as associated with fatigue and dizziness find Cocculus the best remedy. The woman also feels symptoms like headache, numbness of body parts, and nausea. Cocculus is especially suggested when the pain hinders proper sleep and a woman feels pain while standing and on exertion.

Chamomilla is the best remedy for dysmenorrhea when it is associated with the emotional behavior of the woman. The menstrual blood is deep red with clotting and the pain is unbearable extending from the pelvic region to the thighs. This pain normally becomes intense at the night or after the woman is irritated or angry. Chamomilla helps such women in relieving pain.

A woman sometimes feels loads of emotional and physical pressure before the menstrual blood starts flowing as it makes them feel sensitive. She may suffer from headaches, heat sensations, downwards sensations in the pelvic region, and intolerance for touch around her waist and neck. Lachesis is the best remedy for such a woman as it gives her both physical and emotional relief.

Pulsatilla is the best remedy in case of dysmenorrhea when the menstrual cycle is delayed or in some cases suppressed due to hormonal change. There may be some cramping pain associated with bearing down sensations and mood swings followed by sensitive emotional, maybe tearful, state demanding attention. The blood in such cases may be inadequate or thick with dark-colored clotted discharge. Pulsatilla is the only option to ease aforesaid symptoms.

Nux Vomica is the Homeo remedy for women who undergo irregular period cycles. Such women feel constricting pain that extends toward the tailbone or rectum during periods. The change in cycle makes women sensitive, impatient, offended, irritating, and even constipated. The cramping pain in such cases worsens when exposed to some stress, physical and emotional exertion, anger, and even specific foods. Rest and warmth along with Nux can help a lot.

The menstrual blood with heavy flow and extreme cramping with other symptoms like diarrhea, vomiting, exhaustion, and chilliness ask for Veratrum Album Homeo medicine. This medicine is especially the best when the periods start before time and prolong for a long time; the night and cold environment aggravates the pain and discomfort. Body movement like exercise or warm milk or water increases the cramps while cold drinks and warm clothes may ease the condition.

Women are likely to suffer from swelling or edema during their periods along with extreme pelvic pain and in some cases soreness of pubic bone. Bovista is the best Homeo medicine in such cases of dysmenorrhea. The awkward or clumsy feelings, as well as diarrhea, are the other symptoms demanding Bovista. Additionally, the blood flow is high at night and sometimes may be absent in the daytime; this is a strong indication of Bovista.

Sepia is the best Homeo remedy when menstruation is late, painful, and with the feeling like a sagging uterus or weak pelvic floor. Irritation and sad mood in women are common with a high urge to stay alone. Wet conditions like sweating or working in damp surroundings may worsen the symptoms while warmth and physical activity may boost the mood of the woman.

Sabina is one of the best remedies in case of dysmenorrhea associated with extreme pain that spreads down towards the root of the thighs. Sabina is especially helpful to relieve the pain of menstruation when blood is red-colored and clotted.