Typhoid Fever causes severe sickness and the Salmonella typhi bacteria is responsible for this fever. Salmonella paratyphi can also cause typhoid fever which normally causes less acute sickness. These bacteria are transferred to water and eatables through human beings and thus it is ultimately transferred to other people.

What are Common Symptoms of Typhoid Fever?

When it comes to the symptoms of typhoid fever then the very first thing that you will observe is the persistent headache.  Besides, you will become a victim of aches and pains and this will disturb your daily routine of life. If this condition persists then you will possibly receive high and prolonged fever too. Moreover, chest congestion, diarrhea, and abdominal pain may also be triggered. Rashes on the skin are also common in this condition.

Some Symptoms of Typhoid Fever

As stated earlier, typhoid is caused by Salmonella typhi bacterium. These bacteria are spread through contaminated food or water and at times via direct contact with those who have already been affected with this fever. Most cases of typhoid fever are seen in developing countries. This is because of the fact that the sanitation condition in those countries is very bad and similarly the drinking water available there is mostly contaminated. This is the main cause of the increased number of cases of typhoid in developing nations. On the other hand, citizens of developed countries receive the bacteria of typhoid from other people especially when they are traveling. 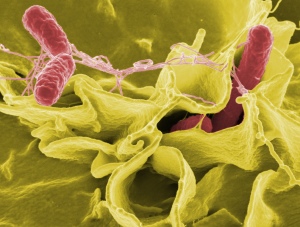 Bacteria That Cause Typhoid Fever in Humans

How Typhoid is Diagnosed?

When a person consumes contaminated food or water then there is always a chance that Salmonella bacteria might have entered his or her body. In this case, the bacteria attack the victim’s small intestine and enter his or her bloodstream for the time being. White blood cells carry these bacteria to different parts such as the liver, spleen, and bone marrow where they multiply rapidly and again attack the bloodstream. During this stage, a few symptoms are seen and most importantly high fever happens to most of the patients. Moreover, these bacteria continue to damage the patient internally and pose very adverse effects on the victim’s gallbladder, biliary system, and lymphatic tissues. At this point, they begin to multiply at a faster speed. They then enter the patient’s intestinal tract and might be observed in the stools. If a patient’s test result does not show a clear picture then it is possible that the doctor would take the blood samples to diagnose the disease.

Homeopathic Treatment for Typhoid Fever in Pakistan By Dr. Sabeel

At Sabeel Homeo Clinic, the perfect treatment of Typhoid is done safely. The diseases can be cured easily at early stages. But even at advanced stages, it can be cured completely if medicines are taken regularly. Some of the common homeopathic remedies are listed below that are used to treat typhoid.

Checkout Some Tips and Advice About Typhoid Fever By Dr. Peter Louis