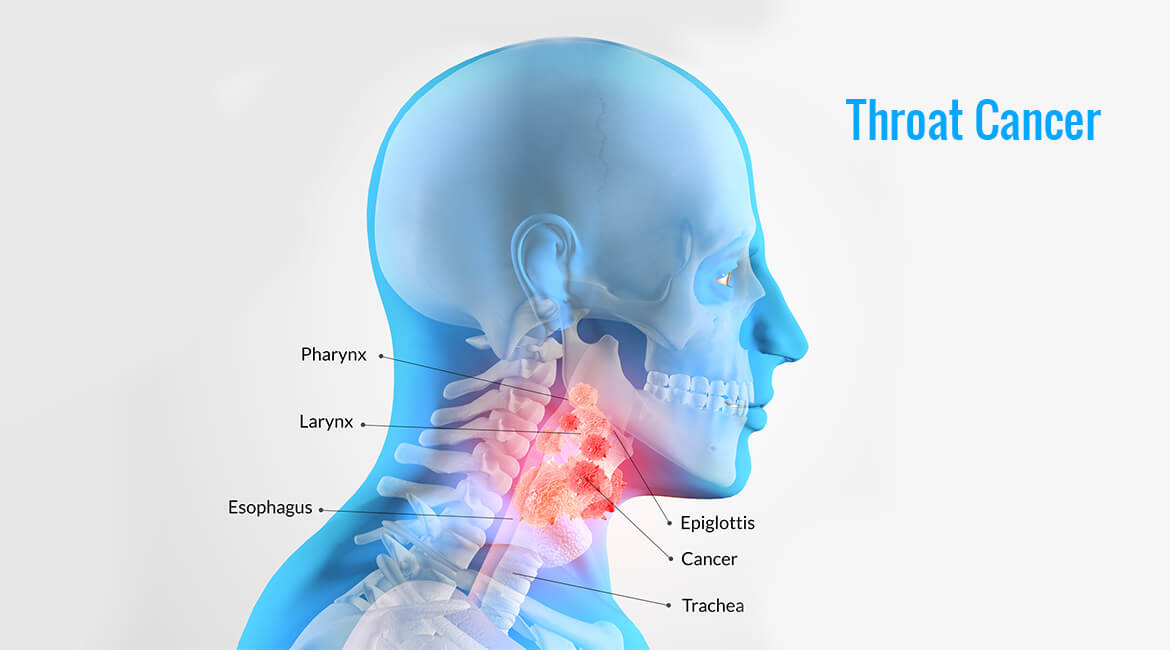 Throat cancer refers to the condition in which a tumor or grown tissues are developed in the throat. Throat includes the area of mouth starting behind the nose and ending at the neck covering the voice box as well as tonsils. A tumor in the throat may affect the speaking and swallowing ability of the patient even after treatment and surgeries. Sometimes this tumor is removed with the removal of the affected part while in less severe conditions burning the tumor may solve the problem. 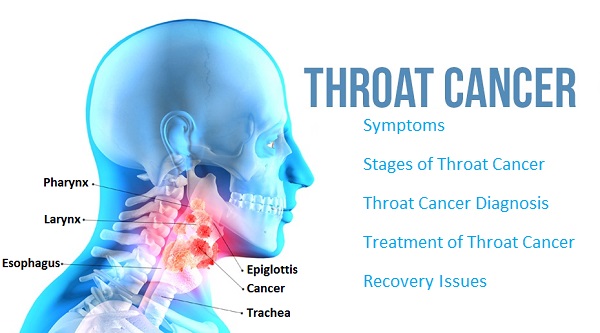 Some of the main Causes to indicate the Throat Cancer

Throat cancer is mostly seen in men than women. Some habits of daily routine increase the chances of throat cancer in every age. Normally this disease can be associated with the following reasons 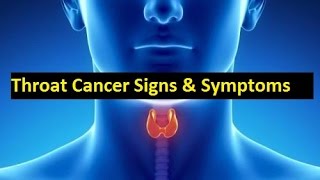 How to Diagnose Throat Cancer from Lab test?

Throat cancer is difficult to diagnose at its early stage as the symptoms associated are normally seen in minor throat problems. Doctors generally do not go for high tests and scan only considering symptoms but if he finds the history of cancer in the family of the patient or patient is in severe pain then as a precaution can ask for some tests and scans.

Important tests and scans needed to diagnose throat cancer are

In Lyngoscopy a detailed examination of the throat of the patient is done with special types of equipment under the supervision of specialists. Laryngoscopy describes the keen details about the larynx with the help of a camera to find the accurate condition. If the results show discrepancies then the doctor may recommend a biopsy to ensure throat cancer.

A biopsy is a procedure of obtaining cells from the affected areas by a surgeon with the assistance of a radiologist to test the presence of cancer. In the case of the throat, a cancer biopsy can be done in two ways. The doctor may choose a simple incision method to remove a tissue piece, in which a piece of tissue is extracted with the help of a needle. Another method adopted for larynx biopsy is by taking a thin piece directly from the tumor with the help of a thin needle. A biopsy can also be done through an endoscopic tube in this case.

X-Ray, CT scan, MRI, or PET any technique can be used to scan the tumor inside the throat and esophagus depending on the stage and condition of the patient. In some cases, a barium test is also done where the patient is asked to intake a liquid thick enough to make a coating over the esophagus and throat. This coated barium helps in providing a clear picture of the throat while X-ray.

Throat cancer once diagnosed needs to be passed through surgery or radiation depending on the condition or stage of the disease. Other factors that determine the mode of treatment are age, immunity power of the body, and other diseases the patient is suffering from at that time. Studying the entire important factors doctor suggests the best way to help the patient get rid of the problem.

The treatment methods used to destroy cancer cells are

Radiation is the effective method used by doctors to burn cancer cells in the early stages of the disease. Radiation waves are pointed directly at the tumor or the surrounding area to burn it. This method is effective to kill the tumor that is not expanded to a large area and can be killed directly.

In some stages, if the needed doctor may suggest surgery to remove the parts affected by throat cancer.  The parts are removed to stop the expansion of the cancer cells across the other parts of the body. Depending upon the condition doctor can remove the voice box, larynx, lymph nodes of the throat, or any other part of the throat affected through a surgical procedure.

Chemotherapy is the widely used method to treat cancers of all types also throat cancer. Chemotherapy is suggested if the tumor is large in size or has covered a wide area inside the body. The procedure involves the injection of special drugs having the ability to kill the cells of cancer. These drugs have the ability to attack beta cells of cancer as well as increasing immunity against these cells.

Targeted therapy is the best approach to fight against cancer cells as it interferes with the growth of malicious molecules that can cause cancer by controlling their growth. This approach uses special substances or drugs that attack cancer cells having less harm to normal cells. Some therapies have the ability to block certain molecules, enzymes, and proteins that assist cancer cells to grow and spread. Normally this therapy is associated with radiation and chemotherapy for better results.

Homeopathic medicines provide the patients suffering from throat cancer to relieve the extreme pain associated with it. It is a safe method of treatment as well as the most effective one as it not only kills the cancer cells from the body but also increases the capacity of the body to heal the disease on its own. Homeopathic treatment is considered safe in the case of throat cancer as other treatments include radiations that can harm other parts of the body as well as do not eradicate the problem. On the other hand, homeopathic medicines not only destroy cancer cells but also help in boosting the body’s immunity system so that they can combat the disease naturally. Some of the best homeopathic medicines to cure are as follows.

Chelidonium is the best medicine in homeopathy to cure the cancer of the mouth, throat, and stomach. It helps in relieving pain and other symptoms of throat cancer as well as fights the cells of cancer.

Condurango is the most suitable medicine for throat cancer if cancer has affected the esophagus as well as has reached the stomach. This medicine leaves no need of removing part affected with cancer as it can fight against these cells and destroy.