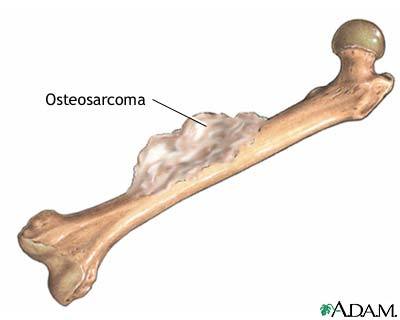 Osteosarcoma is a tumor associated with the bones.

Osteosarcoma is a tumor-associated with the bones. It is the most typical type of bones cancer that causes immature bones to be produced. Osteosarcoma is normally found at the edges of the long bones, mostly seen around the knees. Osteosarcoma is seen mostly under the age of 25 years and more in males than females.

Osteosarcoma is a tumor-associated with the bones.

Signs and Symptoms of Osteosarcoma

The symptom mostly observed in patients with Osteosarcoma is pain. Patients feel high pain in the affected area. However, symptoms of Osteosarcoma may vary with respect to the size of the tumor and the position inside the body. Swelling and tenderness may also be seen in the cancerous area as a symptom if the affected area is joints or near joints. 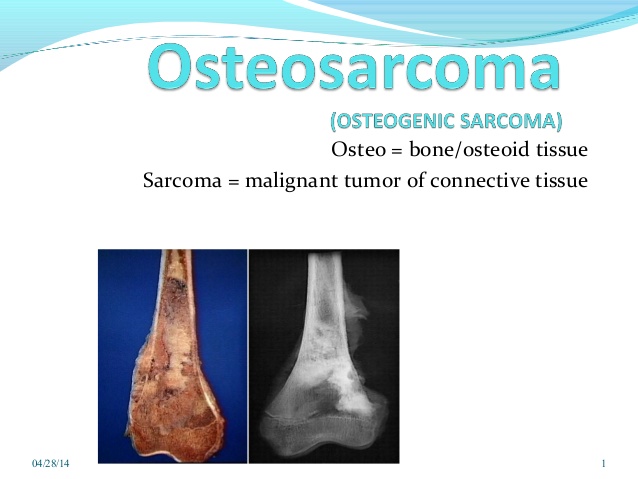 If not diagnosed properly this pain may be taken as to be some common muscle or joint pain. At the same time many other problems may have the same symptoms as mentioned above. But if the patient has some persistent pain in the bone which increases at night, then a visit to the doctor is must as early as possible.

The true cause is still unknown. Scientists are failed to discover the root cause of Osteosarcoma. However, the studies show that Osteosarcoma mainly develops if any part of the body is radiated. Some genetic changes or genetic diseases like Paget’s disease, which causes the bones to be enlarged or misshapen, can also be associated with the cause of Osteosarcoma. 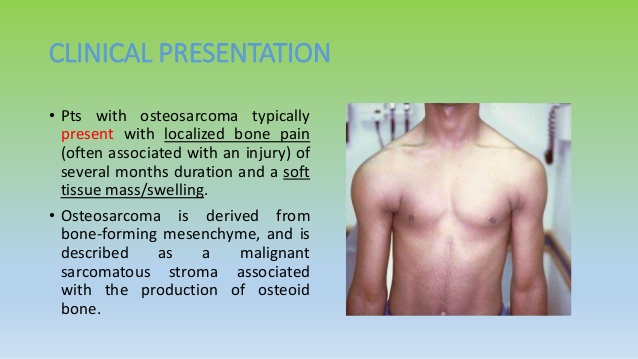 the studies show that Osteosarcoma mainly develops if any part of the body is radiated.

How to Diagnose Osteosarcoma

Normally Osteosarcoma is diagnosed when cancer makes bones so weak that these cannot even bear a minor fall and are broken. When the doctor doubts bone cancer he immediately may refer the patient to the specialist to perform some tests and treatment.

The diagnosis of Osteosarcoma is usually done using the following tests:

A sample of cells is examined by a pathologist.

A small proportion of tumors is collected through a needle by numbing the area to examine.

A picture of the bone is taken using X-rays.

To find a clearer picture than X-ray scan is done. Some radioactive substance is injected into the vein of the arm. Affected bones absorb more of this substance and these areas are highlighted as hot spots.

in this test, magnetism is used to have cross-sectional pictures of the body. It is done inside a large metal cylinder opened from both sides.

in a CT scan, a 3D picture is made using a series of X-rays. CT scan is done if the doctor has doubt of cancer has also affected the lungs of the patient.

The treatment may include a number of therapies depending on the size and nature of the tumor. Normally it is treated using:

All these methods are usually effective when cancer is in its early stages. These treatment methods are very costly, time taken, and have lots of side effects.

Homeopathic medicines are very effective in treating this disease. These medicines work in many dimensions to give relief to patients like minimizing the symptoms, boosting the body’s immune system, stopping the spread of cancer cells, killing and isolating the cancer cells, etc. Homeopathic method of treatment is inexpensive, has no side effects, and requires no painful treatments like chemotherapy or surgery, etc.