What is Seasonal Allergy symptoms causes and Homeopathic Treatment 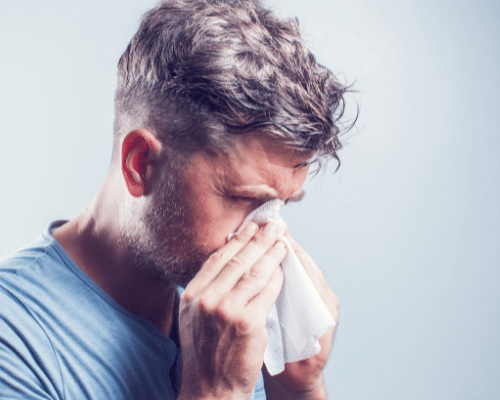 Allergy or unfavorable symptoms appear at a specific time of the year. Seasonal allergy is also known as Hey fever and is normally caused when the plants release pollen in the air. The people who are sensitive to this pollen, their immune system may take these particles as a threat and start releasing chemicals to cope with the problem. These chemicals are released to cause the symptoms of allergy.

The symptoms of hay fever are similar to cold and cough but the level of its severity depends on the exposure to the allergens. The symptoms are as follows.

Seasonal allergies are very easily diagnosed because the pattern of repetition always occurs during the same period of time. Some common tests done by the physician are enough to point out the issue.

The history of the patient is an easy indication to determine seasonal allergies as the allergy attack occurs at a specific time. Additionally, a thorough checkup of the throat, ear, and nose can ease the diagnosis.

The doctor sometimes recommends a blood test to test the allergies.

Two types of skin tests are done by the allergist to check the allergies.

Is it Possible to safely cure seasonal Allergy in Homeopathy?

The seasonal allergy with sneezing in the morning right after waking with a tickle in the nose as its main symptom may be best treated using Homeo medicine Arsenicum. This medicine is especially best when a patient suffers from abundant watery discharge from the nose that brings burning sensations over lips, nose, eyes, or throat; restlessness and anxiety.

The sharply pointed sensation inside the nose that forces to prick or pinch the nostrils making it sore is common during seasonal allergies. Arum triphyllum is a miraculous remedy for such symptoms for instant relief. It is also very helpful in the cases where the patient experiences blocked nose(Lemna minor), sneezing worsening at the night, fluid running from the nose making redness and burning of skin where it flows, and sore nose.

Seasonal allergies reaching the stage of violent and frequent sneezing with the inflammation of the upper respiratory system demands Bromium get instant relief. Bromium also helps in relieving the symptoms like sensitivity to smoking, soreness of the nose, corrosion under the nose as well as an aversion to drinking cold water.

Constant sneezing as seen in seasonal allergies causes high liquid discharge both from the eyes and nose making these organs swell. Such condition gets worst in open areas as compared to a closed one. Dulcamara can help the patients to a great extent to ease such painful symptoms.

Seasonal allergy may lead to feelings of fatigue, hot face, and tiredness of limbs and whole body along with frequent sneezing. The allergy can show even some violent symptoms like sneezing outbursts in the morning, severe watery discharge from nostrils, tingling sensations in the nose, and burning sensations like hot water starting from the throat towards the left nostrils. Gelsemium can be proved as the best remedy for all such symptoms for instant and long-term relief.

Lachesis is the magical Homeo remedy for seasonal allergy attacks in the case when sneezing attack becomes worse while sleeping no matter if it is daytime. Violent sneezing may lead to many complications like headaches, thickening of the nose, congestion in the head, redness of the face, and swelling of the eyes. Soreness and redness of lips and nostrils are also seen in patients along with throat sensitivity to pressure or touch. Lachesis is the solution to all aforesaid symptoms.

In some cases of Seasonal allergies, the sneezing may prolong the distressing period. Patients suffer from extreme irritation in the eyes, nose, and even face as their face becomes hot. Additionally, an itching sensation traveling from the palate towards the larynx and trachea is also noticed. Nux Vomica can help to ease all of such inconveniences.

Sabadilla is one of the best Homeo remedies for seasonal allergies when the symptoms like intermittent but violent sneezing, stuffed nose, fluent watery discharge from the nose, and redness of eyelids are seen in the patients. Sabadilla is especially best in relieving the itching of the nose that sometimes leads the nose to bleed as well as the sensitivity of the patient from the odor of garlic.

The patients with seasonal allergies who constantly require to blow their nose but no discharge flows out of their nose need Sticta Pulmonaria as a remedy. The problem is that the allergy makes the nose stuffed and secretions of the nose get dries too rapidly to be discharged. This dried and stuffed nose makes the nose tingle along with constant sneezing, extreme dryness of the palate, tickling in the pharynx, and feelings of heaviness in the forehead. Sticta helps in releasing the stuffed material inside the nose to relieve irritations and inconveniences.

Seasonal allergy may cause an irritating feeling inside the mouth from the roof up to the ears and also soreness of the throat with hoarseness. Wyethia is the best remedy for such patients having aforesaid issues.

Please do not use any of these medicines on your own without consulting a professional homeopathic doctor.